Guest Article for the Tallahassee Democrat

December 16, 2022, Release for the Tallahassee Democrat

I have always liked the Florida Highwayman paintings. Many of their paintings do a great job of romancing the swampy areas of Florida. If I had to pick a tree that best represents Florida swamps, it would probably be the bald cypress. 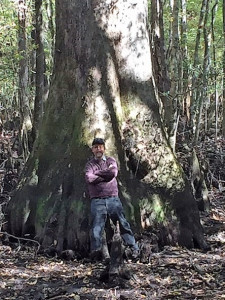 Interestingly, this redwood of the southeast, is represented by two separate species. The pond cypress (Taxodium ascendens) and the bald cypress (Taxodium distichum). The bald cypress is the larger of the two trees and grows in more fertile areas, especially along rivers. The pond cypress, as its name implies, grow where the water is more stagnant, and the soils are less fertile. While difficult to tell apart, the pond cypress has more feathery foliage. I planted one at my old office and everyone fell in love with it.

One of the main attributes of both cypress species is its ability to withstand much of what our Florida environment throws at it. It is one of our most wind sturdy trees. Research by the University of Florida placed it in the highest of four categories in its ability to survive hurricane force winds. Bald cypress is also fire resistant. I have seen where bald cypress trees survived wildfire damage better than pine trees growing right next to it. Granted, the times I have observed this, the cypress were often in a slightly wetter spot, but these trees also resprouted along their trunks and branches like many hardwood trees, despite most of the foliage being burned off from the fire. 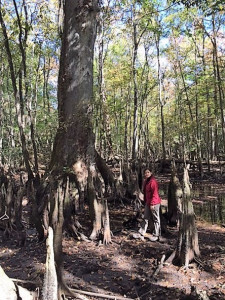 Although fire can seem initially quite destructive to many of our wetlands, it has been found that the long-lived, but shade intolerant bald cypress often benefits from fire as it kills back competing vegetation so that the more fire tolerant bald cypress can reseed in the now newly cleared seed bed.

In the wild, groups of bald cypress trees growing along rivers and estuaries are frequently used as rookeries or roosting by turkeys, nesting herons, egrets, and other wading birds. Older trees with cavities often have holes that make good cavity nesting sites for many birds. Eagles and osprey may build nests in large old cypress trees. Their seeds are a food source for ducks, wild turkey, songbirds, squirrels, and some wading birds.

Of course, I have left out one of the bald cypress’s most peculiar qualities, its knees. We have learned that under the knees of bald cypress there are more roots. It seems that this is an adaptation for more wind sturdiness. Also interesting, is that in urban areas, you only get knees if your soil is really compacted or you are overwatering your landscape. 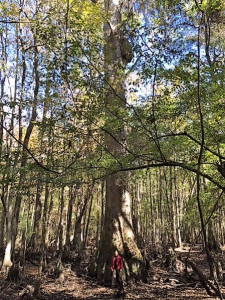 Surprisingly, bald cypress grows very well in upland soils when planted as an urban tree, planted from a pot in a mulched area of a lawn, as it is freer from the competition from other plants. Fortunately, we have found that on these sites, those cool, but potentially bothersome knees don’t occur unless the soil is really compacted or over watering occurs. Bald cypress in urban settings has been found to be a relatively disease free and a very wind sturdy tree. Another advantage of bald cypress, is that its needles turn a nice russet in autumn before they fall to ground, letting in winter sun when we enjoy it. Many people that planted them are very happy with this tree in their yard.

If you decide to plant a bald cypress, or any other tree, it really makes a big difference in both survival and growth rate if you use good planting and establishment methods. An informative website for this can be found at the UF/IFAS Planting trees in landscapes page (https://hort.ifas.ufl.edu/woody/planting.shtml).